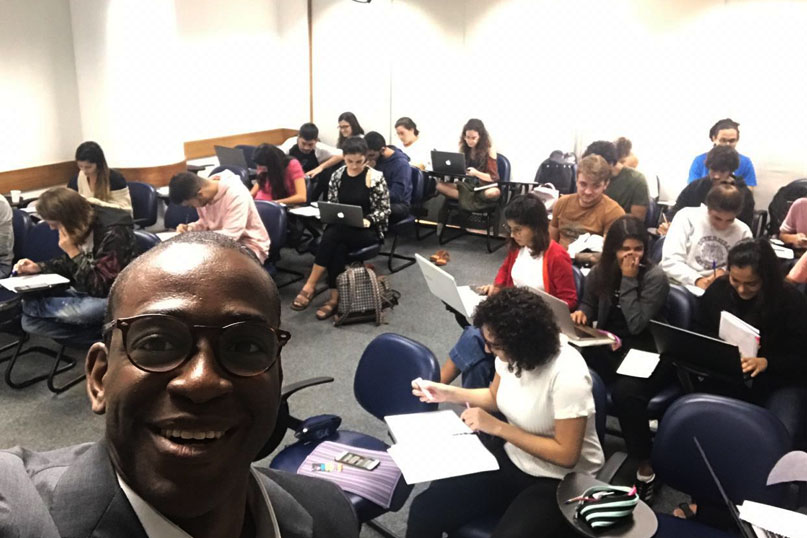 Gilvan Bueno: the path to overcoming challenges and achieving success

Invited by the Brazilian–Swiss Chamber (CHamBR) to travel to Geneva directly from Brazil to participate in a conference on Fintech and Social Inclusion, Gilvan Bueno, CFO of Banco Maré, shares his story of overcoming challenges and achieving success in the financial markets.

“My life is a book which I plan to launch sometime in the future.”  This is how our interview begins with Gilvan Bueno, CFO of Banco Maré, 38 years old and originally from Salvador, Brazil.

“My mother passed away when I was 11 years old. At that time, we lived with my grand-mother in Espirito Santo and I had to assume the financial responsibility for our household by selling popsicles on the street. I left my grandmother’s house at 15 and went to Rio de Janeiro with a dream in mind – to study at the Naval College. As Gilvan begins his story, his eyes well up with tears.

“In Rio, I tried everything in an effort to find my way — including playing soccer — but I was not successful. One of the things I am most proud of is that, despite enormous difficulties, I never stole or used drugs and I was always appreciated by others.”

“God does amazing things in our lives and throughout my life, I have met fantastic people who showed me new possibilities and opened doors for me.”

With a great deal of charisma and excellent communication skills, Gil, as he is known, began his career. Between the ages of 20 and 27, he worked as a waiter in Rio de Janeiro and, since then, new paths have opened up to him.

“The first finance book that I read was Rich Father, Poor Father by Robert Kiyosaki, given to me by a client. At that moment something inside me stirred and I began dreaming of 7 digits”, he laughs referring to the sum of a million reais.

In his quest for success, Gilvan’s life was transformed when a client, impressed by his excellent service at the restaurant, invited him to work with him in the financial markets. The same client would later help him finish high school at the age of 27, earn a scholarship from ENEM, and complete a course in Financial Management at Estácio de Sá University.

“As a waiter I had my formula: a smile on my face, a sparkle in my eyes, and good servisse.”

“My first experience in the financial markets, at 27, was to manage an account of a client with 10,000 reais. Shortly thereafter, I was invited to join a financial advisory company, Geração Futuro, where, luckily, I was able to expand my knowledge of the financial industry.”

“After a year and a half at Geração Futuro, I was someone else, wearing a suit, buying my own house and living well. Geração Futuro gave me the knowledge and, above all, the self-confidence. I then went on to work at Itaú after only one interview. I was appreciated and trained at Banco Itaú where I learned how to think as a banker to large fortunes. “

As a father of two daughters, Gilvan seeks to be an example for them and for those in need on a daily basis. “One day I would like my daughters to say: my father was a great man”, he says while his eyes fill up with tears again.

“My life has been a series of  challenges to overcome. I am here because I always believed in the invisible. Sometimes it is enough to simply be, and believe that small opportunities added together will have a big impact”, says Gilvan.

At the age of 30 and with big dreams, Gilvan joined one of the biggest investment banks in Latin America, BTG Pactual. The last of seven interviews consisted of sharing his life story with one of the bank’s main patners. “After 5 years of much work and learning at BTG, I resigned at the age of 35 to follow my heart and become independent”.

“What motivates me the most is to build a legacy. I want to be an example to other people who have a similar life story as mine and can find inspiration in my story to succeed”.

“As an independent, I began to give private lessons and created an Edutech company — Financeira Academy — which teaches financial education via distance learning. The students say I am a great teacher and, at times, a showman”, he laughs.

Driven by his passion to help those in need, he accepted the invitation to become CFO of Banco Maré three months ago.

Banco Maré is a Social Fintech that helps people overcome barriers and to build the future they dream of by using innovative crypto-technologies such as blockchain. It is estimated that, in Brazil, approximately 30% of the population does not have a bank account.

“I love the financial markets and I have learned how to communicate with ease with those who are less fortunate. Companies face an enormous challenge to help society and I believe that, together, we can provide millions of Brazilians with a better future”, concludes a confident Gilvan.

By Daniela Mendez
Member Board of Directors – CHamBR

Member, Board of Directors – CHamBR